The Queen is dead. A tsunami of national unity is sweeping the country and the press is spewing praise for her “greatness” and “sense of duty”. To hell with all that! Queen Elizabeth II lorded over the remnants of the vicious decrepit British Empire—from Quebec to Jamaica to Botswana. Her governments—both Labour and Tory—slaughtered the Mau Mau in Kenya, invaded Suez, bombed and destroyed Iraq, Afghanistan and Libya. Her army was sent to occupy Northern Ireland, murdering, torturing and starving Irish Republican prisoners. Her Kingdom is a prison for the Scottish, Welsh and Irish Catholics. Her police force crushed the miners strike. She was the living embodiment of all these crimes and more. King Charles III carries on this blood-soaked legacy.

The reactions to her death show all that is rotten about the leadership of the working class in this country. Before her body was cold, Mick Lynch of the RMT and Dave Ward of the CWU—the “heroes” of the so-called “summer of discontent”—cancelled strikes in order to join the orgy of patriotism and national unity. Same goes for ASLEF and the list is likely to grow. As the highest representative of class privilege dies, these traitors are telling workers that fighting against their own starvation must wait, out of reverence to the monarch. These are no working class leaders but lackeys of the ruling class.

Like Liz Truss, Labour leader Sir Keir Starmer—this pretentious knight of Her Majesty—is also in mourning. No surprise there. But it is not just the Blairites. Jeremy Corbyn, Zarah Sultana, Sam Tarry, John McDonnell, Ian Lavery, Ian Byrne and more; all these left Labourites who claim to stand for the working class and “socialism” are weeping and wailing over the loss of...the monarch “by the Grace of God of the United Kingdom of Great Britain & Northern Ireland & of Her other Realms & Territories Queen, Head of the Commonwealth, Defender of the Faith”. What a pathetic display of subservience before the ruling class.

Truss’s arch-reactionary Tory government could not have dreamt of a better turn of events. The country is in complete crisis: inflation, recession, soaring energy bills, labour shortages, the near collapse of social services. Even the Royal Navy’s flagship broke down. The death of the monarch will give the bunch of lunatics leading the government the chance to appear statesman-like and put the national crisis on the back burner—all thanks to the leaders of the working class declaring unilateral class peace.

This country urgently needs a revolution. The only reason it is still ruled by a barbaric remnant of the Middle Ages and a filthy rich, bloodsucking class of useless financiers is because for over a century the working class has been led by spineless Labourite toadies of Crown and Capital. To go forward, workers and oppressed need to break the chains of Labourism and rally around a new, revolutionary leadership and programme. As Labourites give condolences to Charles III, we communists recall the fate of Charles I.

Down with the monarchy! Down with the reactionary United Kingdom! For workers republics! For the international soviet! 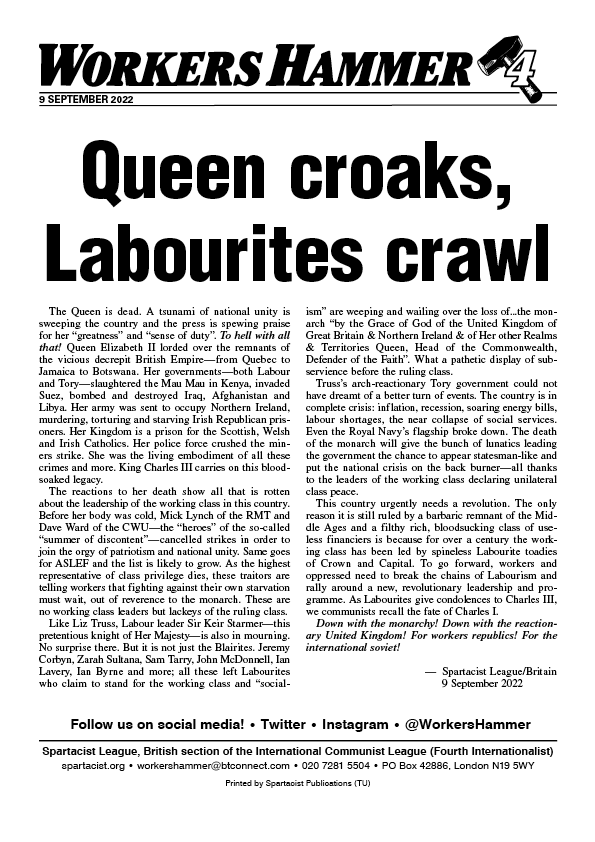