4 AUGUST 2022—With the 11th national congress of NUMSA, the largest union in the country, the bosses have issued a massive threat to all working people. The capitalist courts first tried to interdict the congress, and after it went ahead following a two-day delay are now threatening reprisals, including de-registration of the union and possible jail sentences for NUMSA leaders. It’s in the vital interests of workers in all unions—no matter what they may think of the current NUMSA leadership—to defend the union against this attack. The capitalist state seeks to cripple the power of the unions by dictating to them how they shall conduct their affairs. This comes in the midst of a massive onslaught against workers and the poor—soaring costs of living, record high unemployment, sabotage and privatisation of Eskom and other SOEs. To fight against all of this, what’s urgently needed is the mobilisation of the mainly black proletariat, at the head of the broad toiling masses, on a class-struggle basis in opposition to all wings of the bourgeoisie and its black frontmen in the ANC government. The precondition for this is independence of the trade unions from the capitalist state, which is an instrument for defending the rule of the exploiters against the workers and oppressed. Underlining this lesson in blood, the week after enforcing the court interdict against NUMSA, police in Tembisa township gunned down at least two people in one day during protests against electricity price hikes and power cuts.

It was an opposition grouping within the union that invited the state to interdict the NUMSA congress—an act of pure class treason. Led among others by SAFTU president Ruth Ntlokotse, this opposition gathered support among NUMSA members by appealing to discontent over shady dealings at NUMSA’s investment company and bureaucratic suppression of critics of Irvin Jim and his allies. When Jim and Co brazenly suspended Ntlokotse and dozens of others on the eve of the NUMSA congress, the latter ran to the bosses’ courts to get the suspensions overturned. Even after that was done, they complained that proceeding with the congress violated “the sanctity of the court order” and have now filed for arrest warrants against Jim and NUMSA president Andrew Chirwa for contempt of court. The opposition justifies this rotten treachery with the lie that it is a way to defend “worker control” in the union. As the Marikana massacre and countless other bloody acts of strike-breaking violence show, this state is the deadly enemy of strong, militant unions. By using the bosses’ courts against the union, the opposition is helping the capitalists to cripple the workers’ defence organisations, while at the same time disarming workers and shackling them to the state of their class enemy.

If the NUMSA congress has shown anything, it is that politically supporting either side in the bureaucratic faction fight dividing NUMSA and SAFTU can only spell disaster for the working class. This is precisely what the pseudo- Marxist left does, with most of them seeking to pressure the Vavi faction to the left. The pseudo-Trotskyist Marxist Workers Party is an especially craven example. They hailed Ntlokotse’s election as SAFTU president as the “most politically significant of the victories” won by the Vavi faction against the Jim faction at the May SAFTU congress, hyping her “rank-and-file opposition” in NUMSA as the great hope for the “ideological and political rearming” of the workers movement (marxistworkersparty.org.za, 13 June). Less than two months later, Ntlokotse and Co are fighting for the neo-apartheid state to jail the union’s leaders and install them in their place!

In opposition to such traitors, defending Jim, Chirwa and NUMSA against the capitalist state is an elementary class duty for any trade-unionist worth their salt. Such defence must not be confused with political support for Jim and his faction, which is no less bankrupt than that of Vavi. Indeed, Jim and Co are utterly incapable of mounting any principled defence of the union against capitalist state intervention, because they completely accept the treacherous practice of using the bourgeois courts to settle disputes in the workers movement (they threatened to do the same ahead of the May SAFTU congress). For both factions, such class treachery flows from their nationalist, class-collaborationist programmes, which despite secondary differences are fundamentally similar. Both factions use criticisms of the ANC-led Tripartite Alliance to peddle a programme of re-furbishing the nationalist popular front by building a “left” version of the Alliance—which can only subordinate the proletariat to the racist capitalist exploiters, betraying the working class and the struggle for black freedom. Against this bankrupt dead end, the urgent task is to cohere a revolutionary pole in opposition to both pro-capitalist factions, based on a programme to address the burning needs of the working masses through a struggle for black proletarian power—for a black-centred workers government!

The world is in turmoil. South Africa is a powder keg waiting to blow. In our new publications, the International Communist League (Fourth Internationalist) and its section in this country, Spartacist/South Africa, put forward the Trotskyist answers to key questions posed in this volatile situation. The elements of programme developed in these publications are essential for class-conscious workers and anyone else looking for a revolutionary road out of the chaos and misery of this racist capitalist system. 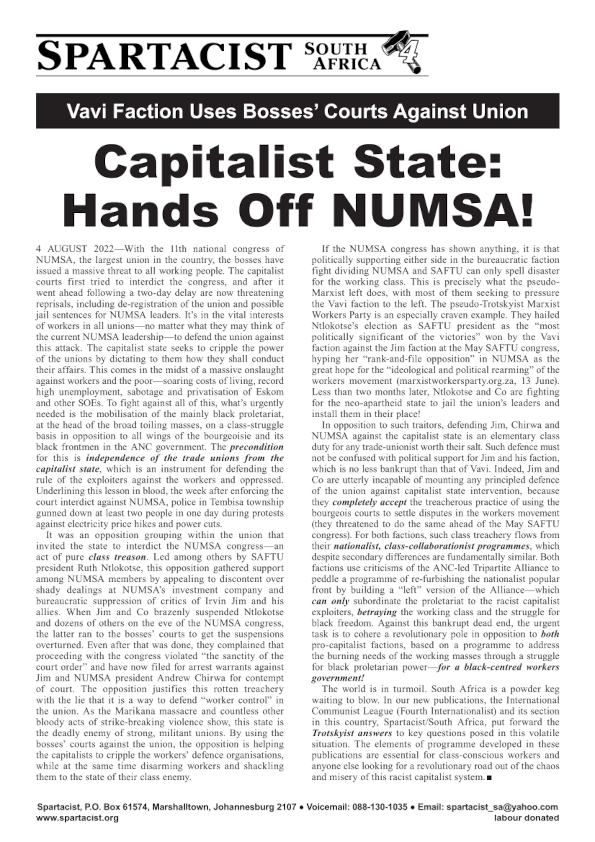