Among the pseudo-Trotskyist swamp in Quebec and Canada, members of the Fightback group have distinguished themselves as the most ardent supporters of Trudeau’s lockdowns and vociferous opponents of the truckers and protesters. There’s simply no difference between the line Fightback has been pushing and the hysterical campaign of the bourgeoisie and its subservient media. In a disgusting slander on social media against our organization intervening at a Toronto rally in support of the truckers, a Fightback leader accused us of “supporting the far right,” adding “There is no way that they could have mistaken the far right nationalist and Trumpite nature of this rally which included Trump flags and ‘Make Canada Great Again’ placards.” Painting these entire demonstrations as being of a “far right nature” by pointing to a few right-wing individuals, Fightback parrots the very lie that the government uses to justify its crackdown.

And Fightback is not just talk: they have actually joined and helped organize counterprotests calling for more state repression of the truckers and protesters! A statement from the organizers of one of these counterprotests in Toronto makes clear their reactionary political basis:

One of Fightback’s recent articles also whined that “the poli­ticians and police have proven themselves unable to deal with the far-right of the ‘Freedom’ Convoy” (marxist.ca, 14 February). Well, they got what they asked for: Trudeau has now invoked the Emergencies Act, a “resolute” response to “deal with” the convoy. Fightback’s hypocritical “opposition” to the Emergencies Act should fool no one. What they’ve been doing since the beginning of the truckers’ protests has been to actively mobilize support for the repression of the convoys. It comes as no surprise to read in their article “opposing” this Act that:

We bet more than a few Fightback members were indeed rather confused that their leadership didn’t openly support the Emergencies Act, since it’s the logical conclusion of the politics they’ve been pushing!

To give itself a populist or workerist cover for supporting state repression, Fightback calls for community vigilante groups to “take matters into their own hands” and for the working class to “mobilize to defeat the convoys.” If taken seriously, this would mean turning citizens and workers into adjuncts of the cops in repressing the truckers. As repulsive as it is, this is not strange coming from these cop-loving “socialists” who hold the position that cops are “workers in uniform.” If you doubt that this position is even possible for a group claiming to be socialist (or if they deny it, as they often do), just look at their article titled “RCMP union wins large pay raise: Every union must demand the same or better!” (marxist.ca, 7 October 2021) Against Fightback’s criminal position that the cops are part of the workers movement, we say: Cops, security guards, screws out of the unions! This is a most basic, elementary demand in the fight for the complete independence of the unions from the bosses and the capitalist state!

Fundamentally, what has gotten Fightback in such a feverish state is its hardcore support for the national unity behind the government’s health care measures. That Fightback is now doing the legwork to crush dissent against the government is but the logical place where their unwavering support to “Canadian unity” and the lockdowns would lead them. Indeed, since the beginning of the pandemic, these fake socialists have pleaded for more, harsher lockdowns! A statement from the International Marxist Tendency (of which Fightback is the Canadian section) demanded: “All non-essential production should be immediately brought to a halt. Workers should be sent home with full pay for as long as it is necessary” (marxist.com, 20 March 2020). One of their recent articles against the convoy shamelessly parroted the moral blackmail of the bourgeoisie, saying that “Removing all pandemic-related health measures immediately would mean another wave and more deaths” (marxist.ca, 5 February). Any pretension by these reformists of struggling for anything which would be in the interest of the working class in the pandemic is an utter sham given their support for lockdowns.

As the NDP and the union bureaucracies stand completely exposed in front of the working class for their betrayal of supporting and enforcing the lockdowns, Fightback is yet again advising these traitors on how to better fool the workers. They write,

This is a total whitewash! The present leaderships of the working class were actively rallying behind the bourgeoisie’s onslaught against the workers throughout the pandemic, as was Fightback! What Fightback is really worried about is that the NDP is so indistinguishable from the Liberals that they will lose electoral support. Communists say: good if the NDP is discredited! The pandemic shows clearly that today’s leaders of the workers movement must go and a new, revolutionary leadership must be forged in its place. Fightback’s program of upholding unity with the Canadian social democracy at all costs is also at the root of their own Anglo-chauvinist opposition to Quebec’s independence and Law 101 (see “Behind the Mask of Fightback: Neither Socialism nor Independence,” Workers Tribune No. 2, Summer/Fall 2019).

The pandemic has been an acid test for any group who claims to fight for socialist revolution: either you use the crisis to advance the revolutionary struggle of the proletariat against the bourgeoisie, or you’re trying to reconcile class antagonisms by promoting an alternative bourgeois program to manage the pandemic. Fightback clearly opts for the latter way. The pandemic has only made clearer the defining feature of these would-be socialists: unapologetic defenders of Canadian capitalist “democ­racy.” Not workers power, but siding with the state to restabilize capitalist order; not a revolutionary party, but the continued subordination of the workers to pro-capitalist leaderships; not independence for Quebec, but maintenance of Anglo-chauvinist “Canadian unity.” This is what you get with “socialist” Fightback. Breaking with such reformist politics is a precondition for anyone who wants to fight to get rid of Canadian imperialism. 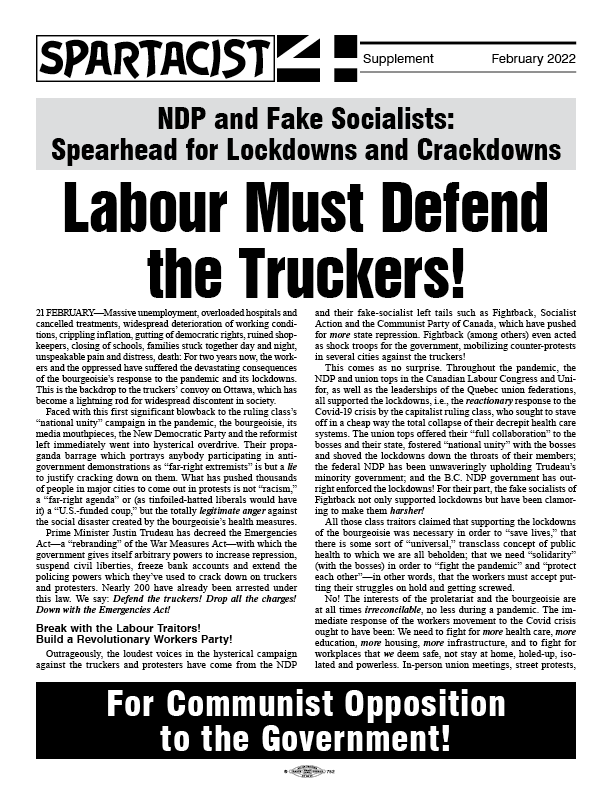